Among all the various events in a person’s life, their wedding is considered to be among the most cherished and memorable event in their lives.

For which, each and everything is required to be in order and perfect according to the wishes of the soon-to-be-married couple.

Starting off with the first event, the mehndi which enacts as the beginner of the continuous three-day-long event.

Selecting the right bridal dress on each event is also very essential, such as the right mehndi dresses. Since every eye is focused towards the bride, whether the mehndi dresses are a sharara, gharara, lehenga, etc.

Having proper and breathtaking attire is one aspect at a mehndi event but one other just as the important aspect is the mehndi chunri or mehndi dupatta to be worn on that day.

So here are some of the mehndi chunri or mehndi dupatta design ideas:

Starting off with this beautiful yellow net chunri, which is a set classic! No matter what attire you decide to wear on your special mehndi event, whether it is a frock, sharara, gharara, lehenga, this dupatta can blend in finely with any type of attire.

It can be properly set into place and give off such a color which is sure to radiate and bring out all the other colors. Colors of the added flower accessories and your attire, making it a complete classical yet elegant traditional look!

This is another net chunni in the shade of lime green. The chunni is very light and can be easily draped over the bride’s shoulder or head, as pleased. 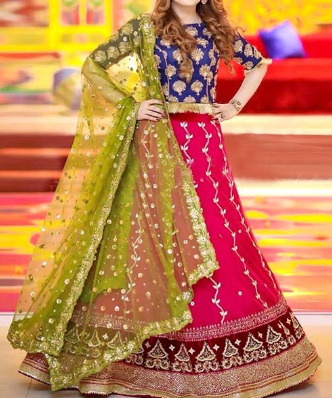 The chunni has shiny embroidery in certain places which creates a fine sheen look along with the added element of a beautiful border on the chunni.

This too can be worn with any type of attire, whether the attire is of the same shade of lime green or of different colors. The chunni can be easily paired with various different shades.

This Chunri also a light lime green colored net Chunribut this is completely plain throughout except on its borders.

The Chunri been bordered with a strip of embroidery with a hint of pink to match the remaining of the outfit.

This dhupatta also been paired with a different color combination of the attire, making it look incredibly striking. The various vibrant colors pull off a spectacular look. 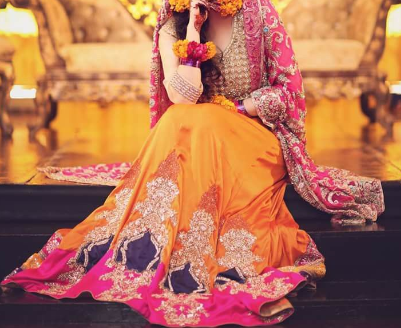 This dupatta falls into a different color category, as yellow, green, or orange are the usual mehndi colors. But nowadays, all the various different vibrant colors are being worn by brides which have now become a trend on its own.

This beautiful pink dupatta has detailed embroidery on it which creates a whole look on its own! 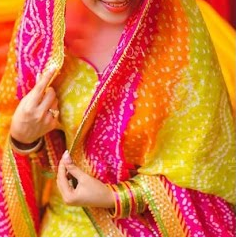 If you are opting for an even more vibrant look, you can consider draping over a dupatta which is beautifully inter-mingled and inter-laced with various different colors. Colors generally worn by brides such as yellow, green, orange, pink, and so on.

All of which can be depicted in this. This can also help maintain a simplistic yet decent look on your mehndi event!

This chunni has a feather-like lightweight feel to it.

This yellow net dupatta not only has a beautifully contrasting pink border but has beads positioned in various places on the dupatta. Along with being lined alongside the ends of the border.

This dupatta can be worn with even a very plain and simple yellow-colored attire, as the dupatta can help pull off the majority of the look!