As the wedding dress is one of the things which leaves a cherished impression and leaves everyone talking about it for days to come! The wedding culture in Pakistan and India is mixed with a number of traditions and customs, all of which are vibrant and flamboyant at most.

In the same way, there has been a range of traditional wedding dresses with a number of options to choose from. Out of which a gharara is one of the most notorious outfits to wear.

What is a Gharara

A gharara is a traditional outfit, consisting of a pair of wide-legged trousers or pants, which are fitted from the waist to the knees and then are ruched at the knee so that they can flare out naturally.

This golden-colored gharara designed to be worn with a short embellished kurti and feather-light net dupatta is no less than an overstatement. A gharara which show-offs every little aspect of detailing on this magnificent attire. Every inch of this attire is line with fine detailing which pretty much speaks for itself.

This attire gives off a very subtle and light turquoise-grey color. The gharara has been finely ruched at the knee with a border statement which matched the end of the gharara and contrasts it beautifully. This is definitely more of a mehndi gharara, which is light and elusive!

This grey-blue outfit is among one of those that is sure to leave an impression. Floral patterns have been embroidered at the base of the gharara which matches flawlessly with the pattern on the frock that has been designed to be worn with this gharara. The frock has a significant caged detailing at the mid which adds a fine touch to the whole outfit.

The gharara is this outfit is the perfect definition of a dramatic flared out gharara. This piece has been cinched up to give off that drastic and added effect. It has been paired up with a golden kurti with fine ornamentation and the dupatta matching the gharara is lined with sparkly beads.

This very popular and branded outfit is among the favorites, it is an exuberant outfit with a mix of light gold and white. It is an all-over perfect combination to wear at the reception.

This is definitely one to make a statement. This embellishment of an outfit is filled to the brim with coarse and fine detailing. The embroidery gives a breathtaking look mixed with the shiny golden color.

This is the perfect and light outfit for those who what to keep it simple with the fine white color and lining of white beads flowing all over the outfit.

This banarsi gharara design has a fine blend of red-orange-maroon colors all of which give off a rustic finish to the outfit. The embroidery on the attire brings the outfit all into one and brings out an overwhelming and remarkable look.

This outfit has the majority of its focus on the detailing on the entire gharara and the dupatta. Among the outfits guaranteed to leave off an impeccable impression this outfit is perfect to wear to your reception.

This banarsi gharara design is for those who are looking to bring a different amalgam of color combination and try out a different color from the usual. This is a mehndi gharara and is a notable combination of deep shadowy blue and grey.

Hopefully, some of these gharara designs helped with bring some insight into what you’ll be wearing to your wedding and give you a visual idea with these Pakistani gharara images!

Here are some more ideas for your Wedding Dresses 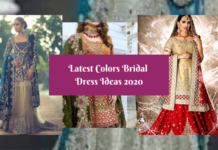 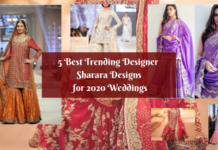 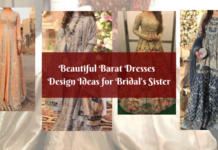